Over the course of his career, Russ Foster was a successful electronics executive. He worked at a number of Silicon Valley companies — including one that he co-founded in 1999 — for more than three decades. He and his late wife also spent approximately ten years founding and running a thriving sailboat hardware manufacturing firm. Russ knows how to get things done — sets ambitious goals, draws up plans and is willing to invest the time and effort necessary to accomplish almost any objective.

Except for completing the Cobra Daytona coupe kit that he purchased in 2001. Or at least, that’s how it seemed to Russ for many years. Because when he retired in 2012 at age 74, the car was still nowhere close to completion.

“A lot of it had to do with my busy work schedule,” Russ explained. “As a founder, I was investing long hours in the company. Many days, I didn’t even come home to my Santa Cruz condo, staying overnight at an apartment in Los Gatos.”

But another major obstacle was that Russ simply didn’t have enough space in the cramped garage at his condo. “I might well have never finished the darn thing — even though I have a lot of perseverance — because I just didn’t have the room to maneuver,” he said.

His workbench was only 18 inches deep, crammed full of tools. He had to put the Cobra onto dollies and roll it around to get to one side or another. There was also no room for major parts. For example, the Cobra has a sleek hood that tilts forward. When the car is being built, the hood really needs to be off the chassis. But Russ had nowhere to put it, making progress incredibly slow and inefficient. Then, he learned about Garage Unlimited.


Russ has been a “latent” car hobbyist, as he describes himself, his entire life. He’s always been a huge motor sports fan, and he built his first car from scratch as a teenager. Around the time Russ retired, he stopped by an informal weekend car show ‘n’ shine in Capitola and happened to meet Jon Lee, who is with Barry Swenson Builder, a co-developer of both Garage Unlimited of Santa Cruz — which had just opened — and its sister project, Garage Unlimited of Monterey, scheduled to open next month.

After hearing about the garage condos, Russ was immediately convinced. He purchased a modest-sized unit and moved his Cobra kit project to his new condo garage.

“My purchase at Garage Unlimited of Santa Cruz supercharged my effort — it made the end-result achievable,” remarked Russ. “Once I retired, with the space in my garage condo, I made working on the Cobra my day job. I finally licensed it in August of this year.”

Part of a Close-Knit Car Community


One of the things that Russ likes about Garage Unlimited is that the facility is a true car-driven community.

“Many of the owners are car or motorcycle enthusiasts,” Russ stated. “There’s a core of people here who have become new friends, and would regularly drop by to chat and see how I was doing with my Cobra project.”

Russ has outfitted the optional mezzanine above his shop in his Garage Unlimited of Santa Cruz condo to create an office and leisure-time refuge — with a desk, refrigerator, bookcases, lounge chairs, and an impressive redwood burl coffee table, plus a treasured collection of racing photographs he has acquired over the years.

“I really had nowhere else that I could hang these,” he said. “So, I’ve created an environment in my mezzanine that’s a celebration of the Cobra race car. It’s nice when someone visits that I can share a little libation — whether it’s coffee, or something else,” he concluded, smiling. 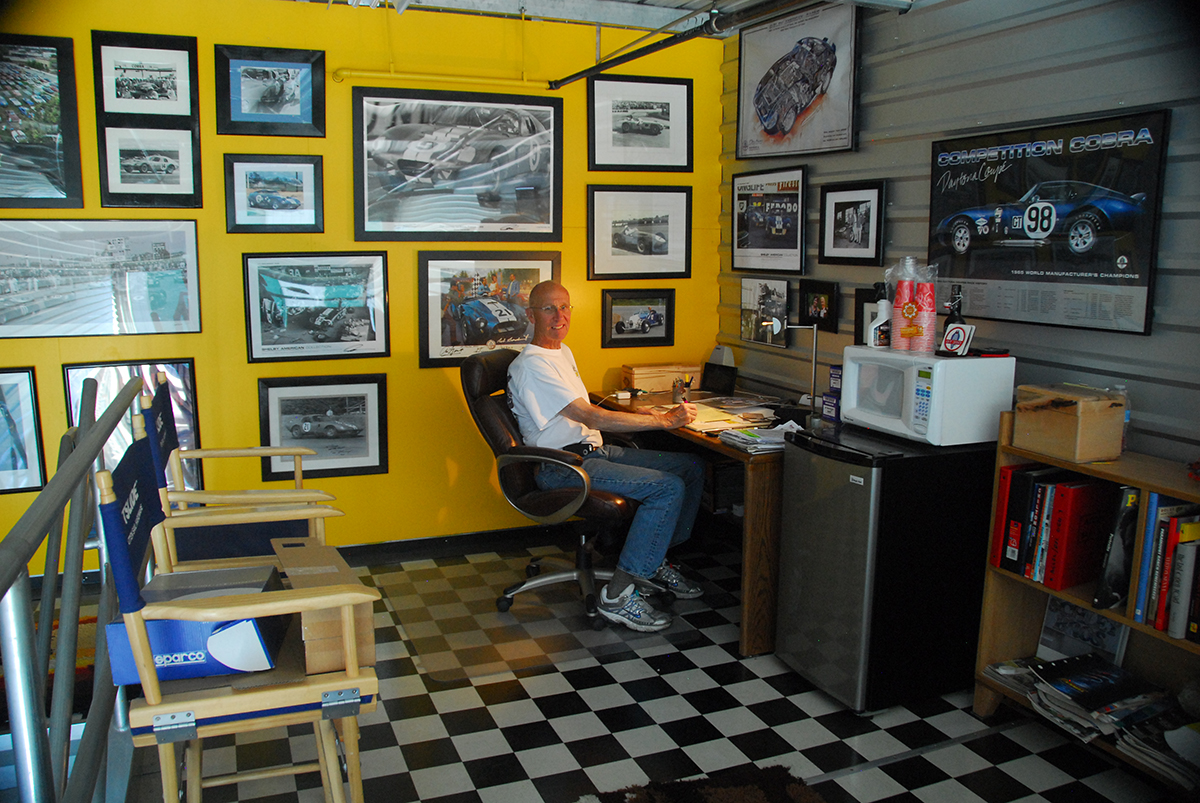 “I’m currently planning to rent my unit there to a car hobbyist looking for a quality workspace like I was,” Russ commented. “I know exactly where to place the provisions for air and electrical outlets to support a hobbyist’s needs. My unit is ideally located, and should be attractive to people for a lot of hobbyist and storage uses. I’m looking forward to Garage Unlimited of Monterey opening in January and making the unit available.”

More than two-thirds of the units at Garage Unlimited of Monterey are already sold, so you can’t afford to wait.